The Big Sky pushback on Beltway politics and the fabrication of “corporate rights” by activists on the Supreme Court is expanding. First came the extraordinary Montana Supreme Court decision that upheld the Montana ban on corporate spending in elections, notwithstanding Citizens United v. FEC. Now, the people of Montana are lining up to have their say, no matter what the Supreme Court does with the Montana case.

On February 28, Montanans filed a ballot initiative to ban corporate campaign spending, reject the attribution of human rights to corporations, and instruct Montana’s Congressional delegation to work for a Constitutional amendment to reverse Citizens United and restore free, fair elections. Here’s some of the key language:

Montana’s elected and appointed officials are generally directed as follows when carrying out the policy of the State of Montana:

(1) That the people of Montana regard money as property, not speech.

(2) That the people of Montana regard the rights under the US Constitution as rights of human beings, not corporations.

(3) That the people of Montana regard the immense aggregation of wealth that is accumulated by corporations using advantages provided by the government to be corrosive and distorting when used to advance the political interests of corporations.

(4) That the people of Montana believe there should be a level playing field in campaign spending that allows all individuals, regardless of wealth, to express their views to one another and their government.

(5) That the people of Montana believe a level playing field in campaign spending includes limits on overall campaign expenditures and limits on large contributions to, or expenditures for the benefit of, any campaign by any source, including corporations, individuals or Political Committees.

Montana’s elected and appointed officials are directed to heed the policy set by Montana citizens and act as follows:

(1)  The Montana Congressional Delegation is instructed to propose a joint resolution offering an amendment to the U. S. Constitution that accomplishes the following:

The entire initiative is here.

Meanwhile, the people of Massachusetts seem poised to deliver another blow to Citizens United and claims of “corporate speech”.  On February 28, the Joint House-Senate Judiciary Committee held a hearing on S.772, Restoring Free Speech for People, which condemns Citizens United and calls on Congress to send a Constitutional amendment reversing the decision to the states for ratification. A day later, the Boston City Council unanimously passed a similar resolution, becoming at least the sixteenth town and city in Massachusetts to do so. In addition, the Constitutional amendment resolution in Massachusetts has been endorsed by the Attorney General, the Senate President, numerous legislators, and thousands of citizens of Massachusetts.

A February 17 poll from Suffolk University shows 81% of Massachusetts people opposed to the Citizens United ruling and unlimited corporate and union spending in elections.

Here’s a photo from the packed hearing room, courtesy of Concord Representative Cory Atkins, showing legislators from around the state asking the Judiciary Committee to report out the Amendment Resolution for a vote: 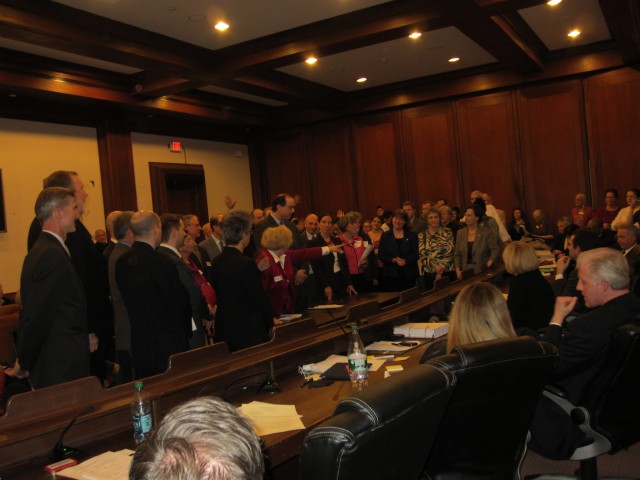 Jeff serves as President of American Promise, a nonpartisan national movement to reform and renew America's political system to combat corruption and secure freedom and equal opportunity for all Americans. He has practiced law for three decades in public service and in a private firm, and is the author of Corporations Are Not People: Reclaiming Democracy From Big Money & Global Corporations. He is also the founder of Whaleback Partners LLC, which provides sustainable financing to businesses in the local agriculture economy. Twitter: https://twitter.com/ClementsJeff LinkedIn: https://www.linkedin.com/in/jeff-clements/
View all posts by Jeff Clements →
This entry was posted in The book. Bookmark the permalink.